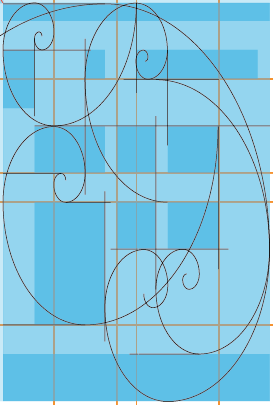 I have to confess that, over the past 5 years, I’ve spent way too much time staring at the web pages of fluid sites, mesmerized by the elements on these pages as they squish and expand, like an accordion, based on how wide I would make my browser window.

As this effect has lost its novelty I’ve yearned to see web layouts that get back to using the age-old principles of 2D design.

As a part of this wish I’m working to develop a grid that’s based on the so called Golden Spiral (as shown in the left illustration, above). This grid will be very helpful to web designers who are interested in visual composition.

If many of you cringe at hearing the words “Golden Spiral” I would not be surprised. I don’t believe that I’ve ever seen a symbol on the Web that has been as badly misused, and misrepresented, as this Spiral. I may have even seen, somewhere on the Web, this beautiful Spiral used to locate Mona Lisa’s left nostril. As though Leonardo was thinking “to hell with my overall composition … the left side of Lisa’s nose is all that matters to me!”.

The use of 2D proportions is well understood by typographers.

Most serious typographers would not subject the letter “A” of Robert Slimbach’s wonderful Minion typeface to this kind of torturous compression, just to make it fit onto my tablet or smartphone. In an unexamined fluid design world, this letter’s harmonious 2D proportions would disappear. The intended design of the letter form would become distorted.

For this same reason, entire 2D layouts that are placed into fluid web environments would only produce distorted caricatures of their intended forms.

The cure for this problem is to use a set of different fixed layouts. Fixed layouts would be intentionally designed for different viewing devices, and each would maintain the integrity of its proportions.

Too many web developers scoff at visual designers that think of web pages as fixed canvases. These developers represent the designer’s wish to master the art of visual communications — through the use of fixed layouts and carefully considered proportions — as an inordinate urge to control the fate of the Web-viewing world.

These same developers tend to associate their automated layout programs with the non-attachment of the Eastern mystics. They argue that we shouldn’t be attached to how forms are arranged on a webpage. Some even try to make the case that the medium itself is not meant to support fixed 2D designs.

For my own part, I’d love to see more web designers reclaim this 2D aspect of design. It would broaden the way communications are transmitted on the Web.